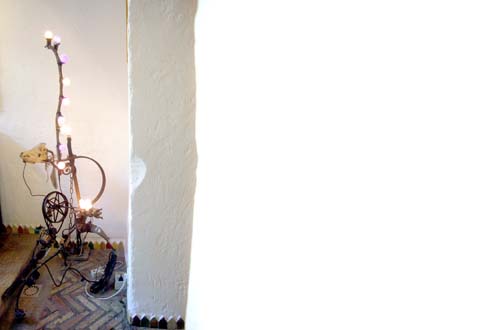 Salvage up my street

So far, I have salvaged an Arts and Crafts hall stand and the below late sixties lithograph poster from a Chagall exhibition at the Maeght Foundation in St Paul. I knew the Edwardian hall stand had value, but it was not until I researched the poster that I found it offered for sale online for hundreds and even over a thousand pounds, depending on the condition. Both salvages were guided by my love for the thing in the street rather than how much the items were worth. However, it got me thinking about the value assigned to objects and how that influences their future and chance of reuse.

We moved to a neighbourhood just next door, yet we never used to see anything in the streets of our old hood. My speculations consider many possible reasons – the most obvious being a different borough equals different attitudes to “fly-tipping”. However, our new neighbourhood has a greater sense of community and more diversity with a greater mix of cultural norms. Sure, some residents are just dumping what they deem to be waste, but I also witness carefully displayed belongings and books that feel less of a nuisance and more like a nice neighbourly gesture. When the owner treats something with value, even when it is no longer of use to them, you can feel the difference, and the likelihood it will be reused increases. Although, the lonely feeling of this picture with cracked glass left as rubbish also evoked an urge in me to rescue it.

It was not until we picked up the poster to carry it home that I noticed a postcard from the same museum tucked in the back of the frame. The note read, exactly as you would hope with great intrigue: ‘You didn’t miss much on set but how lovely it is here and at the Colombe. The ‘regulars’ are here – And behind the walls is serene.’

Yet more research led me to the story of La Colombe d’Or Hotel and the wall, to which I believe the note refers. A meeting place for artists and thinkers, an expansion of the small hotel included a facade made of stones reclaimed from an old castle in Aix-en-Provence. See the works from some of the hotel guests below…

Internet resale value excluded, the poster holds more meaning to me with this rare glimpse into its past. I learned that the architect Jacques Couelle, credited for initiating architecture like sculpture, designed a fireplace at the same hotel with hand imprints of the people who helped to build it. It’s easier to disregard stuff that strangers don’t want, but once you know the story of the people, stuff suddenly feels more significant.

Try SalvoWEB if your street is lacking in good salvage