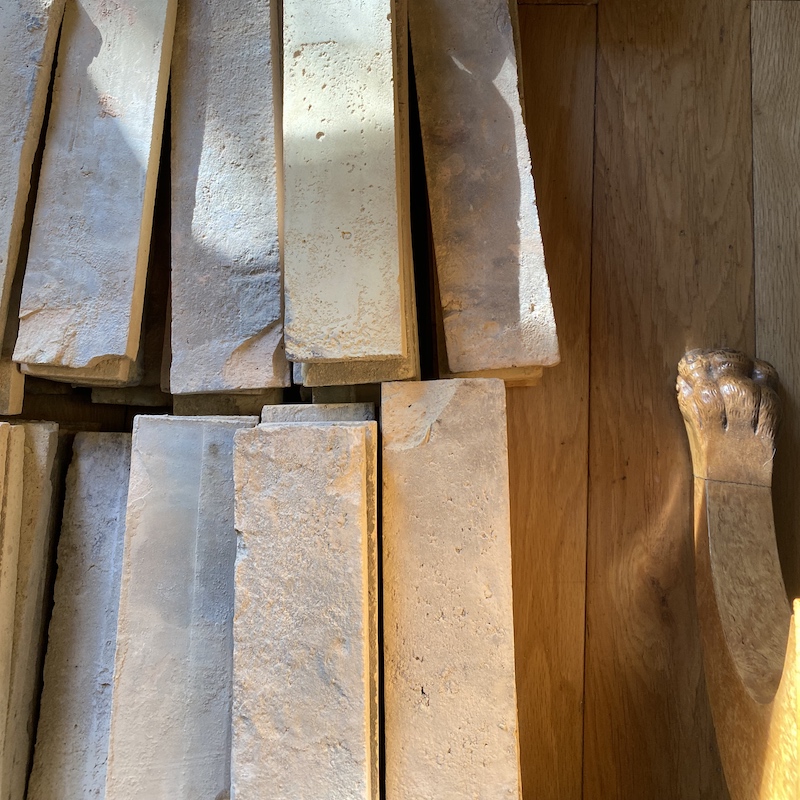 “Is that what the kids are calling it these days?” a friend messaged me in response to my “weekend working on the floor with my husband.” Despite distractions, including mould and moths, our renovation is moving along. We now have reclaimed terracotta roof tiles for flooring in a parquet pattern in our kitchen and hall.

If like me, you’re also struggling with moths – have you tried essential oils or filling sachets with dried mint or lavender?

Before herringbone terracotta started tiling up everywhere, including a Matchesfashion.com newsletter this week, I first fell for them when Salvo Code member Natural Stone Consulting listed them on SalvoWEB a few years ago. I adored the raw elegance of the colours and textural story hinting at their past life as roof tiles. One of the many benefits of designing with reclaimed materials is even when something is trending, your iteration will still stand out from the crowd. The finish you want to achieve can be equally unique, so after having the tiles laid we are gradually finishing the job ourselves.

Step one was sealing them. We were ready to say goodbye to brick dust, as we were living in the flat throughout the project, yet we wanted to maintain the dusty pink shade of the tiles in their natural state, so we opted for a barely-there sealant. But it was there and we did the water dropper test – where you check that the liquid remains on the surface rather than seeping in to prove it. The terracotta tiles from Natural Stone Consulting were salvaged from derelict rural farmhouses and outhouses in Europe so we wanted to show off the time-worn character which dates back to around 1860. If you choose terracotta or another porous stone then it’s worth doing a quick water drop test every year or so in areas like kitchens to check that your protection is still holding up.

Step two was mixing the subtlest sandy grout before applying a second coat of sealer. We had the tiles laid as close as possible, as initially, we were considering going groutless. However, reclaimed terracotta tiles aren’t like laying traditional timber parquet, and they varied in size, so we made a high sand content grout that would blend well with the warm tones of the terracotta.

I’m not going to lie, tilers were in high demand when we embarked on the project, and ours wasn’t attracting the same quantity of interest as quick regular tiling jobs. So although we didn’t lay the tiles, our hours spent on the floor are totting up to more than our builders’. Step three was sourcing a model makers’ kit of tiny tools to attach to our drill and smooth out signs of our floor layers’ learning curve. It was their first time working with reclaimed tiles.

So my friend wasn’t wrong, my husband and I are sharing bonding sessions on our floor, and the earplugs he bought us for raves have come in handy to drown out the drilling. I hear that’s what the kids are using them for these days; house music.