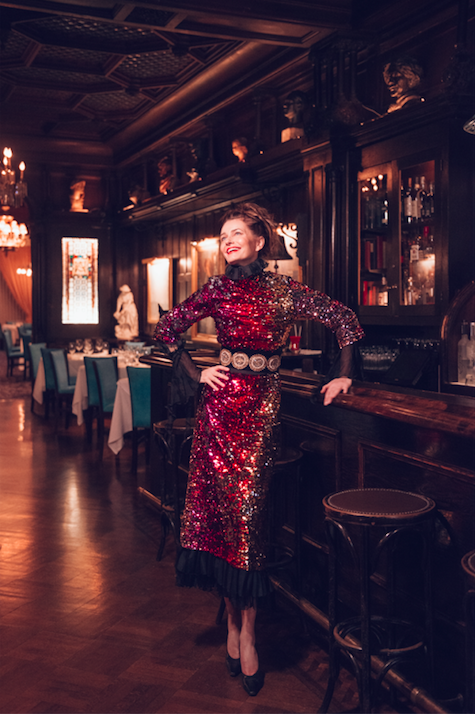 Straight talking feminist, and star in the #MeToo incarnation of the Sports Illustrated Swimsuit Issue, model, actress and author, Paulina Porizkova will return to London for the first time in 35 years to walk at London Fashion Week for emerging ethical designer Jiri Kalfar.

Czech-born Swedish supermodel, Porizkova found status in the 1980s from swimsuit front covers of Sports Illustrated to fronting campaigns for Estée Lauder.  Wearing designs by fellow Czech Jiri Kalfar in The National Arts Club in New York City – one of Porizkova’s favourite haunts, she says it wasn’t until moving to America that she found the need to assert her status as a feminist.  A status she strongly defends to any who say you can’t be both super feminist and supermodel. 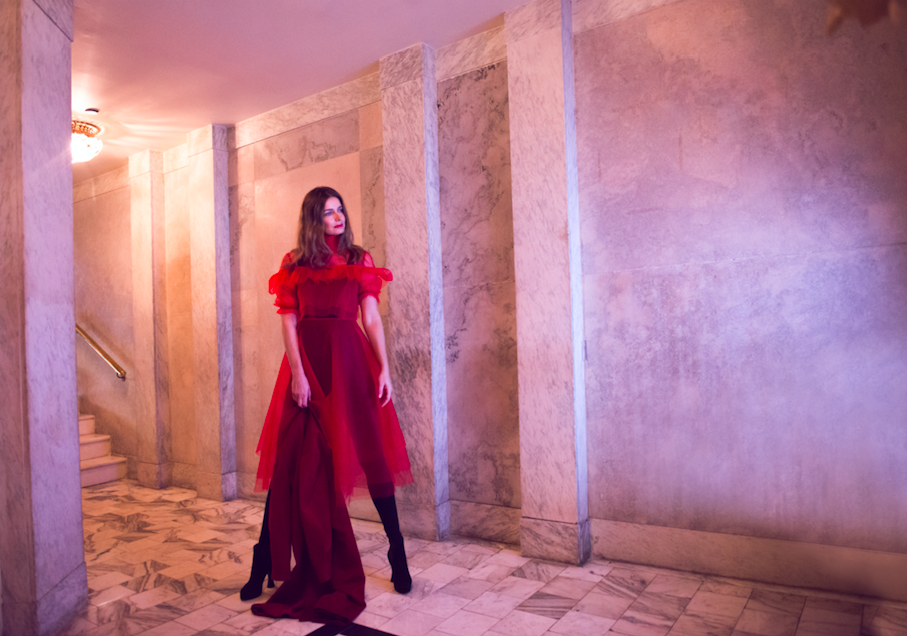 “I would give them a very polite middle finger. Those people are the ones who apparently believe that a woman has no right to make choices with her body (but of course, men do and always have), and that if she uses her looks, she incites desire in men, and thus she is responsible for whatever happens to her.”

Porizkova started modelling at fifteen.  At the time she felt protected by what she calls “Swedish Woman Armor.” In Sweden, she learnt her body belonged to her and her choices were her own.

“With this attitude, I came into a business of rampant sexual abuse and just figured all those people were assholes. I never felt like a victim, because I was certain my choices were my own.  And I was very lucky never to have met Harvey Weinstein.”

Porizkova described her transition through cultural notions and attitudes to women as she moved from Czechoslovakia in the sixties and seventies to Sweden, France and finally America in her opinion piece “America Made Me a Feminist” published by The New York Times last year.  In it, she also described her former gynaecologist in the US, examining her as though she were a Victorian maiden “who’d rather not know” where all her bits were.  Little did she know that her reply to Jiri Kalfar’s direct message on Instagram would fashion her a Victorian again, although this time more Victorian queen than maiden in the designer’s upcoming Autumn Winter 2018 collection inspired by Queen Victoria.

It was during the reign of George V, Queen Victoria’s grandson when (some) British women won the right to vote.  This February marks the centenary of the Representation of the People Act, where women over the age of 30, who either owned property themselves or through marriage were given the right to vote.   This was a big step forward for the suffragette movement,  despite only benefiting land-owning women considered middle-aged for the time, and that the same act dropped the voting age for men from 30 to 21.  One could argue that suffragettes do not sit comfortably in an interview with a supermodel that just posed nude for Sports Illustrated, but the fact that a magazine designed for the male gaze is attempting to question attitudes to women is telling of the #TimesUp trending times.  Porizkova voices her part in the 2018 Swimsuit Issue released this week, which features In Her Own Words  – a black and white shoot of models wearing nothing but words.

“I’d like to mention that in our society nudity is like a great big stop sign. It’s shocking to see a naked woman. If it’s not a flat-out coy, sexy, Penthouse or Playboy type thing then nudity is considered shocking. I wanted to use that shock to speak: to say the words I thought were important. My nudity forces you to stop for a moment, and that moment is long enough to read what I consider important.”

A fan of Great Britain’s ruling queens, Porizkova believes that in some ways the UK is ahead of the US when it comes to women’s empowerment.

“In the US, the hypocrisy of “you can do anything” that turns into “except this” is still rampant, and needs all the help anyone with a voice can give.”

Porizkova recently caught the headlines for saying sexual harassment was such an ingrained part of the business when she started, it was viewed as a “compliment.” Hindsight is a wonderful thing, although Queen Victoria was the Head of State, she held traditional views and opposed giving women the right to vote, but no doubt she would be pleased with what women have accomplished. One could say that like Queen Victoria, the stage was already set for Porizkova.

“It never dawned on me then that I was somehow complicit. It was obvious the stage had been set long ago to make little men feel big. In modelling, as in entertainment and athletics, careers start young and end young. When you are taught the rules as a child, you rarely question them. And the rules have always been:  Pretty women are more valuable women.”

100 years from now, how would Porizkova like to be remembered?

“I would love to be a part of this movement that I believe has already started, the one that empowers women to believe in their powers, their choices, their value being equal to those of a man.”

Like 100 years ago, middle-aged women are winning and in this case walking on the catwalk. At 52, Porizkova asks and why not people in “their Sixties? Seventies? Eighties? Ageism is something that still needs a lot of attention. Our society tells us we women are no longer all that valuable once our looks change from fresh to mature, although I believe we really come into our powers in our forties.”

“His designs are such that I would have overlooked his ethics (to a point, of course), but that he is as dedicated to the ethics of his manufacturing and making the world a better place makes me not just want to wear his clothing, it makes me want to be his friend.”